Create an Account - Increase your productivity, customize your experience, and engage in information you care about.

A Streambank Stabilization Tour of David Mill's project near Enterprise was held on Thursday, October 18th. Thirty-four landowners, producers, and agency people met at the Enterprise City Building for breakfast and several short power point presentations before traveling to the site. Janet Meyer, WRAPS Coordinator, shared information about the present WRAPS Implementation Grant. She described Best Management Practices and the identified HUCs within the Lower Lower Smoky Watershed where these practices could be implemented. A final copy of The Watershed Institute's assessment of the Smoky Hill River from Solomon to Junction City was also available for viewing. Janet also highlighted some pictures she had taken while David's streambank project was in progress. Greg Jueneman, the contractor, was available for questions and clarification.

Mark Schmidt, NRCS district conservationist, also promoted various programs that are available to the farmers through his office and the Conservation District. He had several interesting pictures of a fly over actually depicting each of the weirs along David's project. This stabilization was done with EQIP money. Mark shared the following information about the project:

Despite the windy day, everyone enjoyed learning about the construction and maintenance of such a large project. David's streambank stabilization is one of the largest in the state. The participants also discovered how pricey a project of this size can become. Obtaining the rock needed within a reasonable distance of the project is key to the cost.
The tour was sponsored by LLS WRAPS, Dickinson County Environmental Services, Natural Resources Conservation Service, and Dickinson County Conservation District. 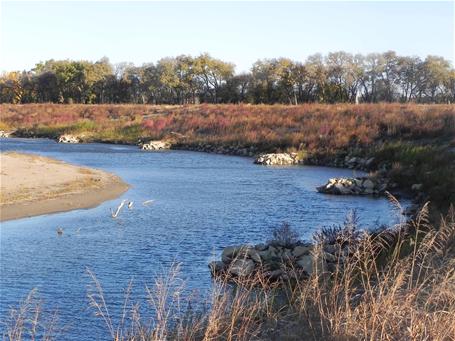